In the past few days my younger 2 children, ages 5 and 2, have been working on fighting some summer bug that’s gotten ahold of them.  The first sign was a fever hit our 2 year old hard and fast and spiked up to 104.  Be

ing an essential oil momma for nearly 2 years now, I went right to my oily cabinet and set out to put something together to assist my son’s immune system in fighting this bug!

The big realization to me that day was… “This used to be so new, scarey, and intimidating!” (using essential oils) “Now it has become second nature to me!”  I just looked through what I had on hand and used the knowledge that I have compiled over the last couple years to blend together something I knew would assist his little body in overcoming whatever was trying to take him down.  My kiddos love the oils.  I think they truly know that they help them!  Using these oils, getting some rest, and being sure they are drinking water is really helping them through!  Plus, it’s building their immune systems to have the ability to be stronger. 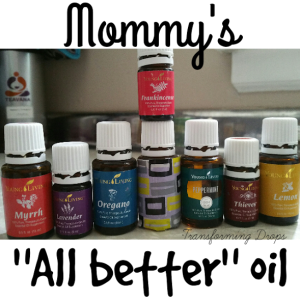 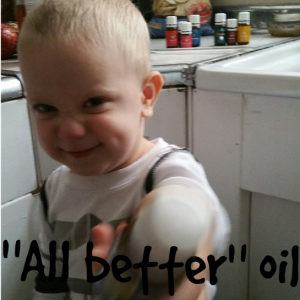 I just put some drops of each oil in the re-used lavender bottle that I covered with colorful tape, then add carrier to dilute it for my kiddos.  There’s a picture of my  youngest showing you his “all better” oil.  🙂

If you want to learn more about the oils, visit my website www.transformingdrops.myoilsite.com and contact me with any questions you have.

It all started Tuesday afternoon, my 4 yr old son laid down for his nap, an hour later he was crying in his bed. I went in to check on him and he was shivering saying that he was freezing and his body hurt. I felt his body and he was burning up! I put thieves and peppermint on his feet and got him to drink some water, took his temp and he was 102.5. 30 minutes later(about 4pm) I checked again 102.8. I gave in and gave him some tylenol (I’m more apt to let his fever burn out between 100 and 101) He got some relief for an hour or so. By 8pm his fever spiked to 103.2 (I had been doing thieves and peppermint every 2 hours) 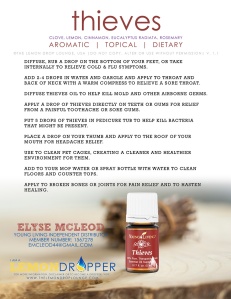 I gave him some Motrin. 2 hours later his fever never broke, I took it again and he was 104.8! I got scared and decided I’d better take him to urgent care because even the meds weren’t bringing down his fever. I put more thieves and peppermint on and also added frankincense to his neck and down his back. His dad also said a special prayer for him before we left.

We took the 5 minute ride to urgent care, and when they took his temp it was 102.8…I thought, hmmm he’s already coming down, that’s amazing to go down 2 degrees in about 15 minutes. He had no other symptoms besides this fever, so even at urgent care the doctor didn’t have a whole lot of answers for me. They thought strep, but his rapid strep came back negative.

(I know some of you out there reading this might be shocked that an avid oil user would turn to a doctor so fast…but I don’t dislike doctors.  Many doctors don’t understand essential oils, and many think I’m crazy when I say that we use them.  I bet some of you out there reading think we’re crazy!  But just like I try to share with each person I teach about oils…ALWAYS use your best judgement about when you need to go see a doctor, and I always encourage the continuance of oils even after you see the doctor as long as you have discussed it with them.)

We came home and I oiled him up once again and put a diffuser with thieves right next to his bed. He didn’t wake all night (which is abnormal when this kid is sick) and when he got up in the morning he was fever free! He played all day like he was never sick! I was SHOCKED when the doctor called that afternoon to tell me his strep test culture was positive and that he’d need antibiotics! NO HE DOESN’T! I truly believe my son was healed. Whether it was the oils or lifting him up in prayer, (maybe it was both) it doesn’t matter. The Lord is amazing and my son didn’t have to suffer through this illness so I give Him all the glory.

Then the next day my throat started to hurt and I began to feel run down.  I started to diffuse thieves all over my house because my youngest (14 months) seemed a little off as well, and I didn’t want any of us to share this illness that my 4 yr old had just overcame.  I put thieves on all 3 of my children’s feet, and decided I better take the “antibiotic bomb” just to make sure I didn’t get sick either.

I took one in the afternoon and then another right before bed.  None of us ever got sick and we were all able to avoid having strep throat and missing out on fun with our friends this week!  I’m amazed over and over again at the healing properties of these oils and how they have changed how we treat illnesses in our home.

Oils in the “Antibiotic Bomb”

Thieves-Is a blend on Clove, Lemon, Cinnamon bark, Eucalyptus, and Rosemary.  It was created from research based on legends about a group of 15th century thieves who rubbed oils on themselves to avoid contracting the plague while they robbed the bodies of the dead and dying.  When apprehended, the thieves were forced to tell what their secret was and disclosed the formula of the herbs, spices, and oils they used to protect themselves in exchange for more lenient punishment.  Studies conducted at Weber State University (Ogden, UT) during 1997 demonstrated the killing power of these amazing oils against airborne microorganisms.  One analysis showed a 90% reduction in the number of gram positive Micrococcus luteus organisms after diffusing for 12 minutes.  After 20 minutes of diffusing the kill-rate jumped to 99.3%.  Another study against the gram negative Pseudomonas aeruginosa showed a kill rate of 99.96% after just 12 minutes of diffusion.

Frankincense- Is an immuno-stimulant.  It was well known during the time of Christ for its anointing and healing powers and was one of the gifts given to Christ at His birth.  It was valued more than gold in ancient times, and only those with great wealth possessed it used to treat every conceivable ill known to man.

If you would like to learn more about these oils, please click the Oils 101 tab on the top of my blog page.  Feel free to email or message me any questions you have.